Bingo Halls, like Gala Bingo, offer a great alternative to traditional online casinos and the usual casino games. The game play is a lot more relaxed (if you want it to be, unless you are like me, on the edge of your seat waiting for that one number that you need to be able to shout B-I-N-G-O!! But that's just me!). Most Bingo Halls offer the two most widely played bingo games around, the 75-ball and 90-ball variations.

This the most popular version (also called the US version). Each card has 25 blocks, arranged in the format 5 rows by 5 columns. 75 numbers are called, each number is randomly chosen and then sorted into one of 5 columns for a maximum possible 15 numbers per column.

What makes each game different, is the fact that you don't always have to get the same pattern to get bingo. There are over 6000 possible patterns that are played, from a total blackout (all the numbers on the card must be called out), to corners (only the numbers that make the four corners of the card need to be called out). Some of the patterns include:

This is the version that is most often played in the UK and other European countries. In the 90 ball the cards are called tickets. Each card has six tickets, with all 90 possible numbers distributed throughout the 6 tickets. Each ticket has three rows and nine columns, with each row containing only five numbers, the rest are blank.

The winning patterns are always the same (Single Line, Two lines and Full House) and the first player that gets the pattern wins the prize associated with that pattern. A jackpot is usually also given when a player gets a Full House in a period called the Balls to Jackpot time. See Bingo Hall for more detail. 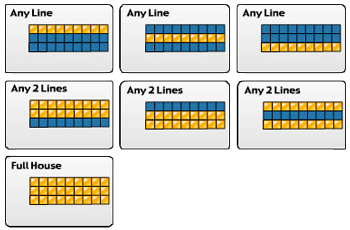 Where To Play Bingo

Receive a $25 Welcome Bonus with your 1st deposit at Vic's Bingo.